Greenberg: Archaeological Museum has a phenomenal collection & The Museum of the Macedonian Struggle is brilliant

Home
|
Blog
|
Greenberg: Archaeological Museum has a phenomenal collection & The Museum of the Macedonian Struggle is brilliant

Stephen Greenberg is Creative Director of Metaphor working exclusively in the cultural and heritage sector, specializing in the planning and design of museums and exhibitions. He is a designer with 40 years’ experience.

Exactly two years ago we met him in Skopje, Republic of Macedonia, on a work shop for the Macedonian museum curators, in cooperation with the British Council in Macedonia.

What was the purpose of your visit to Macedonia?

I was invited by the British Council in London to take part in their Museum Training programme, in partnership with the British Council Macedonia. I led two days of lectures and workshops, with around 30 delegates from 17 national museums from around Macedonia. The delegates included curators, guides and educators. It was an extremely productive two days, creative and imaginative, and enjoyable!

Tell us something more about the new trends in museology and contemporary exhibitions. You took part in various project world wide.

There is a trend in museology worldwide towards worshiping the building, not the content. World-renowned architects build huge museums, which are above all about status, politics, the search for the ‘Bilbao’ factor and their own vision.

Museums of natural history, science, social history and art museums are not the same thing, and they are quite different. Inside art museums are all just a variation on the white box.
But above all, many of the new museums are impossible to display within. It is as if they are overdesigned, and are not forgiving spaces! They drown the content, because they don’t design with content, objects, photography, film, and great stories in mind. I believe all museums should start with the story, not with the building. It is one of the great challenges facing museums worldwide.
Museums are central to our identity, they ask who we are. For me, an exhibition is about pushing the content and the story. Objects are the meeting point of meanings and stories. Through the theatre of display we create a drama where the visitor almost becomes the actor. They edit the experience as they move through it, like a movie in space. Every journey is unique and individual.

After the work shop, what is your opinion about the knowledge of the museum workers and curators in Macedonia?

The curators and museum workers are extremely knowledgeable about their collections, their museums, their histories and their stories. But it was also clear that this was among the first opportunity they’d had to all work together collaboratively. That’s a really interesting dynamic. Often what an expert, who knows their collections really well needs most of all – is a fresh pair of eyes.

It is not clear which direction museums are going in here. There are governance issues here. Making directors responsible for everything including security and theft will terrify them, and they will fear for their jobs and even their freedom. On the other hand, sooner or later the museums of Macedonia, like everywhere else, will have to seek income streams from catering, corporate hospitality, events and retail. It is inevitable. For this they will need the right governance structure.

What was your opinion regarding the museum you visited in Skopje? Impressions?

I was able to visit a few museums in Skopje. We were unable to make it further, to Ohrid, Stobi or Bitola, as we didn’t have time, but maybe another time.

The Museum of the Macedonian Struggle was brilliant, and a total surprise. It was brilliant because it used narrative paintings, dozens of them. The walls were covered in historic tableau, so much so that they began to work like a film. Some were also excellent paintings. And they were taken from old photographs, well researched. Macedonia clearly doesn’t have an extensive film archive of historical events of the 20th century as some countries do, so it made the best of the evidence and then worked with painters who were trained in the soviet propaganda era and transferred their skills, These paintings, combines with scenography and sound, created a moving journey.

What struck me about the Archaeological Museum in Skopje was how phenomenal the collection is. When I arrived in Macedonia, I got a text from Visit Macedonia saying ‘Welcome to Macedonia, the cradle of civilization’. That’s the story this museum should tell through its stunning collections.

But it is a lost opportunity and in the wrong building. It lacks the vitality, coherence, and energy of the Museum of the Struggle. And when it uses historic paintings it just doesn’t work because they become tropes, like Hollywood re-enactments.

It doesn’t work as a museum because really it is in an office building. The circulation is poor, and it is black box space when most of the artifacts could be displayed in natural light. The spaces weren’t designed to flow into each other; there are no sight lines, and so no bigger picture. The entrance hall, despite the grand stair, is not welcoming and it has low ceilings. It is not clear how the objects are grouped and why, and how they relate to this bigger picture. It is a great pity.

I have no objection to a classical building, and I have seen museums in recreated Roman atrium spaces that are lovely. This, I understand, is what is intended for Stobi, and it’s a great idea.
The National Museum of Macedonia is actually a very good building from the 1970’s and a wasted opportunity. It has a wonderful collection, but its building and resources have been allowed to crumble and it is in terrible condition. Some of its collections have also gone to the new museums. Refurbishing it for say 10-15 m euros, could transform it. It could become an ethnological exploration of all Macedonia, in different areas and different periods. It can still be a truly national museum. I am thinking of the Archaeology Museum in Mexico City, also in a very open building from the late 60’s.

The National Museum building has a very interesting plan, many views across the galleries and out into the city. The spaces flow. Just imagine it with new stairs and handrails, modern cases and lighting. It could be outstanding. I can see a world-class museum here.

It is also in a great location. The entrance terrace could have cafes and restaurants so that it becomes a continuation of the Bazaar. You could incorporate the Caravanserai as an outdoor garden, with another restaurant and with small shops or galleries. When Skopje design week is held here, it would look back to Macedonia’s heritage in this area, as well as to the future.

There is now a new 5 star hotel adjoining the Museum. So you can see how this area could become a new cultural quarter of Skopje. It would create a cultural cluster using authentic historic buildings and spaces from all periods. It would bring businesses back into this crumbling quarter of the bazaar, and tourism back to the old town. The whole area would be lifted just like the area around Galata in Istanbul.

Unfortunately, refurbishment of 1970’s buildings is unfashionable and tends not to be glamorous enough for governments to put their name to.

You mentioned during the workshop that sometimes exhibitions start outside the museum and they can be part of the context, as a form of preparation for what they can expect inside. We have here a few examples of this type, right?

A classic example is an archaeology museum with statues, sarcophagi and architectural fragments in an outdoor terrace or park. This used to happen at the National Museum. The Museum of Contemporary Art (another good building from the 1970’s) would gain from some big open-air pieces, using it’s outside spaces more.

What do you think Skopje and Macedonia in general is missing to make the museums more attractive for the foreign and domestic visitors?

I think your question has picked up on a problem in some of the museums. Who are their audience? The Museum of the Macedonian Struggle was wonderful, because it told a story. The paintings worked like a film, they did all the work. And they told recognizable scenes that Macedonians know already. But I’m not sure it works so well for foreign visitors.

Sometimes museums need to ask whom they are for, and how to tell their story differently for these different audiences.

I think for the museums outside Skopje, it’s worth thinking about how you can ‘cluster’. How you can partner archaeological sites with vineyards and cycling trails and camping sites, or a Bronze Age observatory with canoeing.

When we will see you again in Macedonia?

I would love to see more of Macedonia, but it’s a busy time at the moment so maybe some time soon. 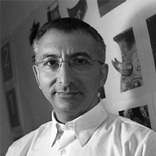 In 2000 Stephen Greenberg founded Metaphor, a company that specializes in the design and master planning of museums, exhibitions, historic houses, and cultural quarters.

Metaphor blends both the ‘hard’ thinking (to do with architecture and design) with the ‘soft’ thinking (of story and concepts).

Stephen has overseen the making of major blockbuster exhibitions at the British Museum, the Victoria and Albert and the Guggenheim Bilbao.