Bitola (Macedonian: Битола [ˈbitɔɫa] is a town in the southwestern part of the Republic of Macedonia.

It is located in the southern part of the Pelagonia valley, surrounded by the Baba, Nidže and Kajmakčalan mountain ranges, 14 kilometres (9 miles) north of the Medžitlija-Níki border crossing with Greece.

The town stands at an important junction connecting the south of the Adriatic Sea region with the Aegean Sea and Central Europe, and is an administrative, cultural, industrial, commercial, and educational centre. It has been known since the Ottoman period as “the city of the consuls”, since many European countries had consulates in Bitola.

Bitola is one of the oldest towns on the territory of the Republic of Macedonia, having been founded as Heraclea Lyncestis in the middle of the 4th century BC by Philip II of Macedon. The city was the last capital of Ottoman Rumelia, from 1836–1867. According to the 2002 census, Bitola is the second-largest city in the country. Bitola is also the seat of the Bitola Municipality.

The name Bitola is derived from the Old Church Slavonic word ѡ҆би́тѣл҄ь (obitěĺь, meaning “monastery, cloister”) as the city was formerly noted for its monastery. When the meaning of the name was no longer understood, it lost its prefix “o-“.

The name Bitola is mentioned in the Bitola inscription, related to the old city fortress built in 1015. Modern Slavic variants include the Macedonian Bitola (Битола), the Serbian Bitolj (Битољ) and Bulgarian Bitolya (Битоля). In Byzantine times, the name was Hellenized to Voutélion (Βουτέλιον) or Vitólia (Βιτώλια), hence the names Butella used by William of Tyre and Butili by the Arab geographer al-Idrisi. During the ruling of Radomir Gavril(1014–1015) Bitola is mentioned under the name of Buteliu. The Aromanian name is Bituli.

The Greek name for the city (Monastíri, Μοναστήρι), also meaning “monastery”, is a calque of the Slavic name. The Turkish name Manastır (Ottoman Turkish: مناستر‎) is derived from the Greek name, as is the Albanian name (Manastir).

Bitola is located in the southwestern part of Macedonia. The Dragor River flows through the city. Bitola lies at an elevation of 615 meters above sea level, at the foot of Baba Mountain. Pelister (2601 m) is a national park with exquisite flora and fauna, among which is the rarest species of pine, known as Macedonian pine or pinus peuce, as well as a well-known ski resort.

Covering an area of 1,798 km2 (694 sq mi). and with a population of 122,173 (1991), Bitola is an important industrial, agricultural, commercial, educational, and cultural center. It represents an important junction that connects the Adriatic Sea to the south with the Aegean Sea and Central Europe.

Bitola has a mild continental climate typical of the Pelagonija region, experiencing warm and dry summers, and cold and snowy winters. The Koppen classification for this climate is Cfb. 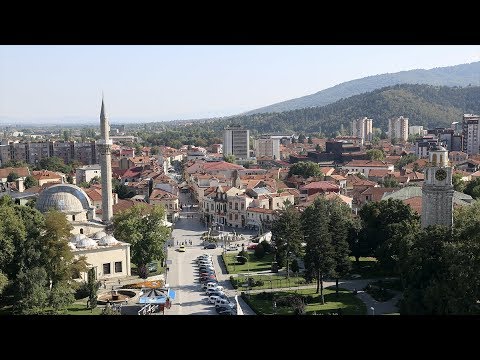